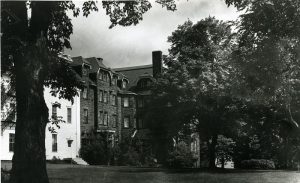 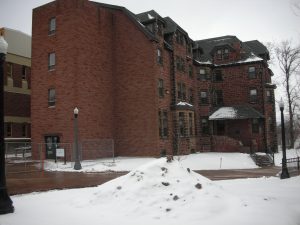 I have continued the research into the influences of vernacular architecture on the creation of positive learning experiences in undergraduate and postgraduate medical education.

My report on the first phase of the research is described in the posting:

It has been exciting and stimulating to collaborate with colleagues in the Department of History, St Mary’s University, and in the Faculty of Architecture and Planning, and the Faculty of Medicine, Dalhousie University; all in Halifax, Nova Scotia.

The main source for my research has been Mount Allison University’s archive and David Mawhinney, University Archivist, has been tireless in his assistance to me.

I am very grateful to Dr John Reid, professor of history, Department of History, St Mary’s University, and to Dr Anne Koval, professor of art history, Fine Arts Department, Mount Allison University, for allowing me to participate in some of their seminars. I have had the opportunity to explore the results of some of my research with their students and I found the discussions were most productive. The students seemed to find relevance to their communities of learning in the results.

Vernacular architecture explores buildings in terms of geography, tradition, culture, society and anthropology. There is an extensive literature about the buildings and spaces for learning at university; often involving the concept of generative buildings that influence the communities of learning for students and faculty. Other concepts relate to the effects of the campus environments on engagement and learning.

What are the reliable sources of information about the validity of these concepts regarding the interactions between architecture and learning from the perspectives of the students?

The students’ views are often not considered despite their centrality at the university. Hence the students are the particular focus of inquiry in this research through searching the Mount Allison archive for details that emerge, often incidentally, and through seeking to reconstruct what was happening.

Hart Hall was designed in 1910 and modified in 1920 by the architect Edmund Burke. It is a four storey building and in the 1950s it included residence accommodation for 50 female students, apartments for several faculty, reception rooms, teaching rooms, and a gymnasium in the basement.

There were around 300 female students in the female residences on campus: Allison, Borden and Hart Halls (1954/55). These three halls were also known as the University Girls’ (sic) Residence (UGR). 80% of females resided in the UGR; the rest lived in residences in the town which was about ten minutes’ walk away.

As evidence of the challenges caused by increasing enrolments, in Hart Hall in 1955, six students shared one bathroom on their part of the floor which became the norm during the 1950s. Most women shared a room with one or two others. 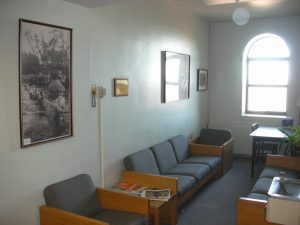 Most students and members of the faculty and staff lived on the campus and there were frequent social contacts. For example, in October 1955 the new women students were guests of the Women’s Council at a tea in Hart Hall common room with Council members providing the hostessing and guests including the president and his wife, dean of women, deans of various residences, nurse, and dietician. Such social contacts enabled discussions about the university’s insecurity over future income and the search for identity following the recent closures of the Ladies’ College (1946), Male Academy (1953), and Commercial College (1955). Topics of discussion also included the issue of staff moving to university employment or having joint appointments with other institutions, and concerns about the quality of students who enrolled and the quality of the faculty.

Another example related to identity comes from the area of sports. Each floor of the residences competed in a wide range of sports with rankings published in Mount Allison’s paper, the Argosy Weekly. However, the women studying in the Commercial College who had residence in Hart, Borden and Allison Halls were required to have their own sports teams. The students taking the commercial courses in the Commercial College were not considered to be on the same level as the university students.

With one or two exceptions, students were not permitted to keep cars on campus and there were few distractions in Sackville so there was widespread involvement in extracurricular activities within the university community. Sackville was a small town so the university needed to be self-sufficient and the students had to entertain themselves.

The Choral Society were especially prominent using the grand yet homely Fawcett Hall, built in 1910, architect Willard Mitchell, whenever possible. The Debating Society, otherwise known as the Eurhetorian Society, had a notable meeting in a Hart Hall reception room in 1951. At the meeting “…Little was done except to discover that nobody knew anything about anything, since no one had been in the group last year, or any other year…As soon as they get a copy of the Constitution they will draw up a schedule of debates…” which they did very effectively so much so that Mount Allison won the Canadian University Debating championship in 1955.

There are many links in this case study connecting the components of vernacular architecture to the learning experiences of the students in the 1950s.

The challenges faced by everyone in the Mount Allison community included increasing enrolment, lack of capital, income insecurity, and identity definition. The students were acutely aware of these challenges hence they put pressure on the faculty for changes.

In the 1950s and early 1960s many reports were written and many debates took place culminating in a vision for Mount Allison’s students and for the society of the university based on social justice and intellectual excellence.

This vision was translated into –

I am continuing to write up the research following my recent visits to the archive at Mount Allison. I have been on the campus in October 2017 and 2018 when the Maclean’s university rankings were published and there was a palpable excitement amongst faculty and students about the rankings. There was no complacency though and there was a commendable openness in the thoughtful discussions about the strengths of Mount Allison University and the challenges in order to achieve continuous improvements.

Many of the issues regarding these strengths and challenges were identifiable in the 1950s and there is much about the vernacular architecture and the learning environments that is relevant today.